Godfather of the Blues..Junior Wells 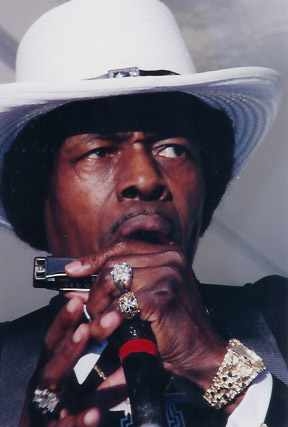 Junior Wells (December 9, 1934 ? January 15, 1998[1]), born Amos Wells Blakemore Jr.,[1] was a blues vocalist and harmonica player and recording artist based in Chicago, who was also famous for playing with Muddy Waters, Buddy Guy, Bonnie Raitt, The Rolling Stones and Van Morrison... Life and career He was possibly born in Memphis, Tennessee,[1] and raised in West Memphis, Arkansas though other sources report his birth was in West Memphis, Arkansas.[2] Initially taught by his cousin, Junior Parker, and artist Sonny Boy Williamson[disambiguation needed], Wells learned how to play the harmonica by the age of seven with surprising skill. He moved to Chicago in 1948 with his mother after her divorce and began sitting in with local musicians at house parties and taverns.[3] Wild and rebellious but needing an outlet for his talents, he began performing with The Aces (guitarist brothers Dave and Louis Myers and drummer Fred Below) and developed a more modern amplified harmonica style influenced by Little Walter.[3] He made his first recordings at age 19, when he replaced Little Walter in Muddy Waters' band and appeared on one of Waters' sessions for Chess Records in 1952. ( Born December 9,1934, Wells would likely be only 17 for a 1952 session.)[3] His first recordings as a band leader were made in the following year for States Records.[4] In the later 1950s and early 1960s he also recorded singles for Chief Records and its Profile Records subsidiary, including "Messin' with the Kid", "Come on in This House", and "It Hurts Me Too", which would remain in his repertoire throughout his career. His 1960 Profile single "Little by Little" (written by Chief owner and producer Mel London) reached #23 in the Billboard R&B chart, making it the first of two Wells' singles to enter the chart.[5] Junior Wells worked with guitarist Buddy Guy in the 1960s, and featured Guy on guitar when he recorded his first album, Hoodoo Man Blues for Delmark Records.[6][3]" Wells and Guy supported the Rolling Stones on numerous occasions in the 1970s.[6] Although his albums South Side Blues Jam (1971) and On Tap (1975) proved he had not lost his aptitude for Chicago blues, his 1980s and 1990s discs were inconsistent.[6] However, 1996's Come On in This House was an intriguing set of classic blues songs with a rotating cast of slide guitarists, among them Alvin Youngblood Hart, Corey Harris, Sonny Landreth.[6] and Derek Trucks. Wells made an appearance in the 1998 movie, Blues Brothers 2000, the sequel to The Blues Brothers.[3] The film was released less than a month after his death.[3] He had continued performing until he was diagnosed with cancer in the summer of 1997.[3] That fall, he suffered a heart attack while undergoing treatment, sending him into a coma.[3] Wells was interred in the Oak Woods Cemetery, Chicago after succumbing to lymphoma on January 15, 1998.[1]

Oops, you forgot something.

The words you entered did not match the given text. Please try again.