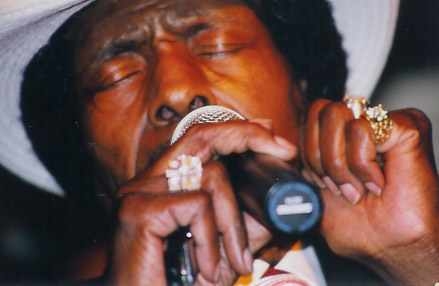 Junior Wells was born Amos Blakemore in Memphis, Tennessee on December 9, 1934. While his parents farmed in Marion, Arkansas, Junior took an early interest in music, influenced by the likes of Howlin Wolf, B.B. King and Big Walter, all in nearby Memphis. Junior had his first harmonica lesson from Junior Parker, his neighbor, and went on to teach himself how to play. He worked the streets playing for tips and moved to Chicago with his mother when he was 12 years old. A rebellious youth, Junior worked all week on a soda truck to buy a harp he had seen at the pawn shop. Upon being told it cost $2.00, Junior put down his entire week's earnings of $1.50 and ran out with the harp. When later he was asked by the judge why he had done this, Junior replied that he "just had to have it". The judge then told to Junior to play it and upon hearing Junior play, the judge gave the complainant $.50 and dismissed the case. At 14, Junior got his first professional job playing with Dave and Louis Myers at the C&T Lounge at 22nd and Prairie, in Chicago. Two years later he walked up to Muddy Waters at the Ebony Lounge and told him he could play harp. Muddy asked him if he knew his timing and Junior responded "I think so". He then stood on a coke box to reach the microphone and with a not too pleased Little Walter looking on, Junior proceeded to earn $45.00 in tips that night. He and Walter went on to become good friends and when Walter left Muddy in 1952 to go on his own, Junior took his place in Muddy's band. Junior Wells was a vocalist, instrumentalist, bandleader, composer and producer. He could blow, choke and spit into a blues harp with an inexpensive hand held public address mike and create sounds other musicians have spent years trying to imitate. His style was based on a first hand knowledge of the entire preceding generation of harp blowers, including both Sonny Boys, Little Walter, and Big Walter Horton. In 1953 and 1954 at the age of 19 and 20, Junior recorded a number of classic tunes including Hoodoo Man. He had the support of such friends as Elmore James, Muddy Waters, Willie Dixon and Otis Spann. Some of these sessions were done while Junior was AWOL from the army. In 1966 Junior recorded his first LP, Hoodoo Man Blues, one of the first blues LPs to record blues as it sounded in the bars and not a "greatest hits" record. The album is still considered one of the best blues albums ever recorded and is a must for every serious collector. In 1966 Junior teamed up with Buddy Guy and toured the entire world thrilling audiences with their dynamic brand of Chicago blues, becoming in the process, the most famous team in blues. They opened for the Rolling Stones in 1970 and recorded "Drinkin TNT 'n' Smokin' Dynamite" at the Montreaux Jazz Festival in 1974 with Bill Wyman, Pinetop Perkins, Dallas Taylor and Terry Taylor backing them up. Chosen as one of the ten best albums of the year by Billboard's editors poll, the album is considered one of the best documentations of a live blues performance. More recently, Junior toured with his very strong 8 piece band including 3 horns, and continues to thrill audiences with his showmanship. He recently joined Van Morrison for 14 shows on his American tour. In September of 1993 he celebrated the release of his first American studio album in many years, "Better Off With The Blues" on Telarc Records. His second record on Telarc, "Everybody's Gettin Some", released in March of 95 is still getting high praise. Special guests, Carlos Santana, Sonny Landreth and Bonnie Raitt all join Junior for some intense blues. Telarc recently released album #3, "Come On In This House", an album in which Junior goes back to his roots with an all acoustic album featuring 6 of the best slide guitar players in the world teaming up with Junior. The album has received widespread acclaim and was nominated for both a Grammy and a Handy Award as the best traditional blues album of the year and in fact won the Handy Award. The 1997 Living Blues Magazine's Reader's Poll selected "Come On In This House" as the best newly recorded blues album of 1996. He recently performed with Tracy Chapman on the 1997 Grammy telecast. He was also featured in the 1998 film, "Blues Brothers 2000". Junior Wells was an intense singer, blues harp genius and a consummate showman. He would take you up with searing licks and boogie and then take you "down in the alley" with gut wrenching slow blues. He would wring you dry of your emotions and leave you begging for more. He has influenced every harp player to follow him. With his ever present hat and slick style of dress he was truly one of the reigning legends of blues today.

Oops, you forgot something.

The words you entered did not match the given text. Please try again.